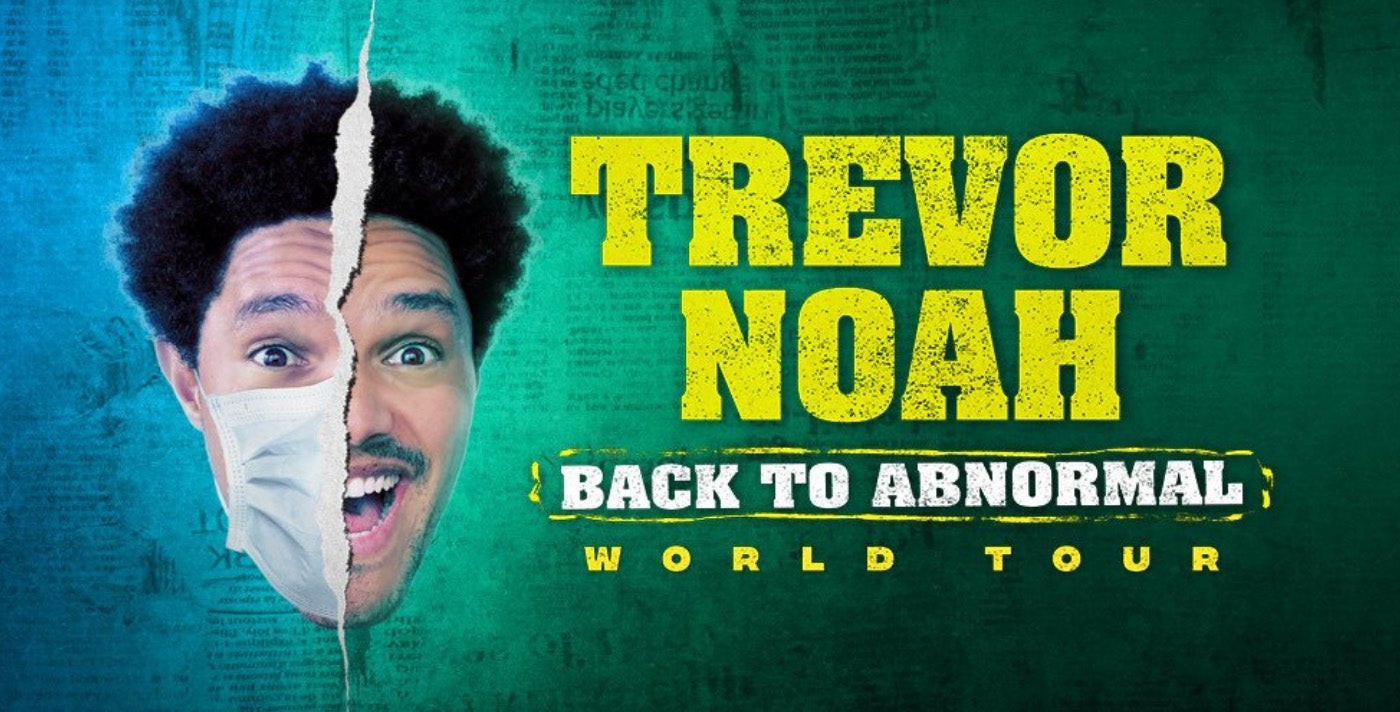 Produced by Live Nation, the tour opened in London with two sold out shows at The O2 Arena and will continue with stops in Washington D.C., Houston, Chicago, Los Angeles, and more before the 2021 leg wraps up with two nights at San Francisco’s Chase Center on December 10th + December 11th. Due to overwhelming fan demand, 2022 dates have just been announced with 21 new shows including a night at New York’s iconic Madison Square Garden, stops in Baltimore, Indianapolis and more before ending internationally in Toronto’s Scotiabank Arena on October 1, 2022. General tickets for new dates go on sale Friday, October 1 at 10AM local time on LiveNation.com.

Noah’s critically-acclaimed late-night, The Daily Show with Trevor Noah recently returned to a brand new studio. The Emmy nominated show continues to engage with its fans by creating an interactive and robust social and digital experience including deep dive explainers, scripted and unscripted packages, as well as the show’s legendary biofilms on notable figures, and more. To date in 2021, The Daily Show is the #1 most-engaging late-night show with over 118M engagements, 2B views across platforms and 3.3B minutes consumed on YouTube.

Born in South Africa to a black South African mother and a white European father, Noah has hosted numerous television shows including South Africa’s music, television and film awards, and two seasons of his own late-night talk show, “Tonight with Trevor Noah.”

Trevor has written, produced, and starred in 11 comedy specials, including his most recent, “Trevor Noah: Son of Patricia,” on Netflix. The special touches upon racism, immigration, camping and more. “Trevor Noah: Son Of Patricia” received a NAACP Image Award for Outstanding Variety Show, as well as a Grammy Award nomination for Best Comedy Album. Other recent stand-up specials include “Trevor Noah: Afraid of the Dark” (2017) on Netflix and “Trevor Noah: Lost in Translation” (2015) on Comedy Central. Noah was the subject of David Paul Meyer's award-winning documentary film “You Laugh But It's True” which tells the story of his remarkable career in post-apartheid South Africa. His Showtime comedy special, “Trevor Noah: African American” premiered in 2013. He was nominated for "Personality of the Year" at the 2014 and 2015 MTV Africa Music Awards and won the award in 2015.

Trevor's success has also spanned to sold out shows over 5 continents. Trevor crossed North America on his first ever arena outing with the “Loud & Clear Tour 2019.” Due to popular demand, Trevor expanded his Loud & Clear Tour to 2020, with over 75 sold-out North American shows to date. In October 2021, Trevor will return to the stage for his “Back To Abnormal World Tour.” Due to overwhelming fan demand, 2022 dates have just been announced with 21 new shows including a night at New York’s iconic Madison Square Garden.

In 2019, Trevor launched a new podcast series “The Trevor Noah Podcast.” In his podcast, Trevor challenges himself – and all his listeners – to explore unfamiliar angles, embrace differing viewpoints, and celebrate the contradictions that make the modern world both bewildering and exciting. In 2020, “The Trevor Noah Podcast” won the Webby Award and Webby People’s Voice Award for News & Politics (Podcasts).

“Born A Crime” is a collection of personal stories about growing up in South Africa during the last gasps of apartheid and the tumultuous days of freedom that came with its demise. Already known for his incisive social and political commentary, here Noah turns his focus inward, giving readers an intimate look at the world that shaped him. These are true stories, sometimes dark, occasionally bizarre, frequently tender, and always hilarious. Whether subsisting on caterpillars during months of extreme poverty or making comically hapless attempts at teenage romance, from the time he was thrown in jail to the time he was thrown from a speeding car driven by murderous gangsters, the experiences covered in this book will shock and amaze, even as they leave you rolling on the floor with laughter.

The Audible edition of “Born a Crime,” performed by Trevor, was produced by Audible and remains one of the top-selling, highest-rated, and most-commented-on Audible performances of all time. “Born a Crime” won the Audie Award for “Best Male Narrator,” and was also nominated in the “Autobiography/Memoir,” “Best Narration by the Author” and “Audiobook of the Year” categories. The paperback version of “Born a Crime” came out in February 2019. In April 2019, Trevor released “It’s Trevor Noah: Born a Crime,” adapted for young readers. The book not only provides a fascinating and honest perspective on South Africa’s racial history, but it will inspire young readers looking to improve their own lives. To date, “Born a Crime” has sold over 2 million copies across all formats.

In partnership with ViacomCBS and led by Noah, Day Zero Productions develops and produces diverse, high-quality creative content for a global audience. With projects set up both within the ViacomCBS family, as well as at other studios, streamers, and live platforms, Day Zero focuses on entertaining and necessary content, with an eye toward authentic stories from diverse points of view. Among the current projects are the adaptation of Noah’s best-selling and award-winning autobiography “Born A Crime,” with Lupita Nyong’o starring and Liesl Tommy directing for Paramount Pictures and a reimagining of the classic feature President’s Analyst. Additional features include a biopic centered on 8-year-old Nigerian chess champion Tanitoluwa Adewumi and an untitled animated feature with Paramount Animation and Mainstay Entertainment, based on an original idea from Noah. On the television side, Day Zero is producing several scripted and documentary series including partnering with Time Studios and Sugar23 on The Tipping Point, which examines urgent issues around the world from voting rights to civil rights, human rights to healthcare, and American Democracy to the global refugee crisis. Day Zero also produces Nickelodeon’s annual Kid of the Year TV special alongside TIME Studios.

In 2018, Noah launched the Trevor Noah Foundation to improve equitable access to quality education for underserved youth in South Africa. Noah's vision is a world where an education enables youth to dream, see and build the impossible. In collaboration with the government, their partners, and communities, the Foundation implements dynamic school programs that give youth the best chance of succeeding once they leave school. For example, through a partnership with Microsoft, the Foundation provides under-resourced schools access to digital tools and skills to enable 21st-century education for learners and teachers. The Foundation currently impacts over 500 teachers, 6000 learners, and countless families within the communities.