“We believe these changes will have a significant positive impact on our building,” said Hornets Sports & Entertainment President & COO Fred Whitfield.  “Moving the Box Office to the Trade Street Plaza will ensure that fans buying tickets or picking them up at will call will do so in a separate area from fans coming into the building, which will enhance our entry procedures.  The Hornets Fan Shop will be located in the ‘living room’ of Spectrum Center, where nearly every person entering or exiting the arena will have to pass by it.  This move should benefit both entities, as well as our patrons and staff.”

The new Box Office location will have 10 interior windows for ticket sales and will call on the Trade Street side of Spectrum Center.  The three current exterior windows on the 5th Street side of the arena will remain, providing the ability for patrons to visit a ticket window on either side of the facility.  The current Ticketmaster kiosks on both sides of the venue will remain as well. 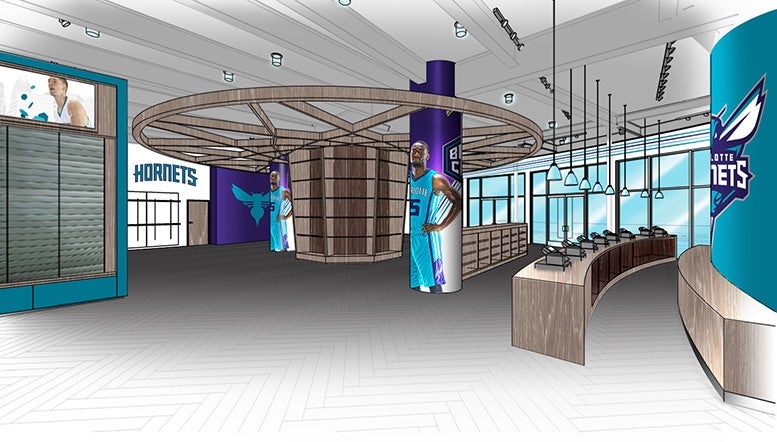 The new location of the Box Office will also alleviate congestion as fans enter Spectrum Center for events.  All patrons will have their tickets prior to entering the Main Lobby, as opposed to the current flow with ticket sales and will call lines located in the same area where fans are trying to enter the arena.

AECOM, which has served as project manager for all of the Spectrum Center upgrades over the past three years, and LS3P are the architects for the new Box Office and Hornets Fan Shop.  Rodgers Builders will once again handle construction, as it has for each of the construction-related projects during the las three years.

During construction, the Hornets Fan Shop will open a temporary location in the Blue Cross Blue Shield of North Carolina Home Court area on the 5th Street side of Spectrum Center.  This location will be open Monday, Wednesday and Friday from 11 a.m. – 6 p.m. and Saturday from 10 a.m. – 5 p.m., with the exception of days when Spectrum Center hosts an event.  For ticket sales, the three exterior ticket windows on the 5th Street side of the arena will be open Monday through Friday from 11 a.m. – 5 p.m., except on event days when they will be open later and on arena event on-sale days when they will open at 10 a.m.  In addition, the Ticketmaster kiosks on both sides of the building will remain open from 6 a.m. – 11 p.m. seven days a week.