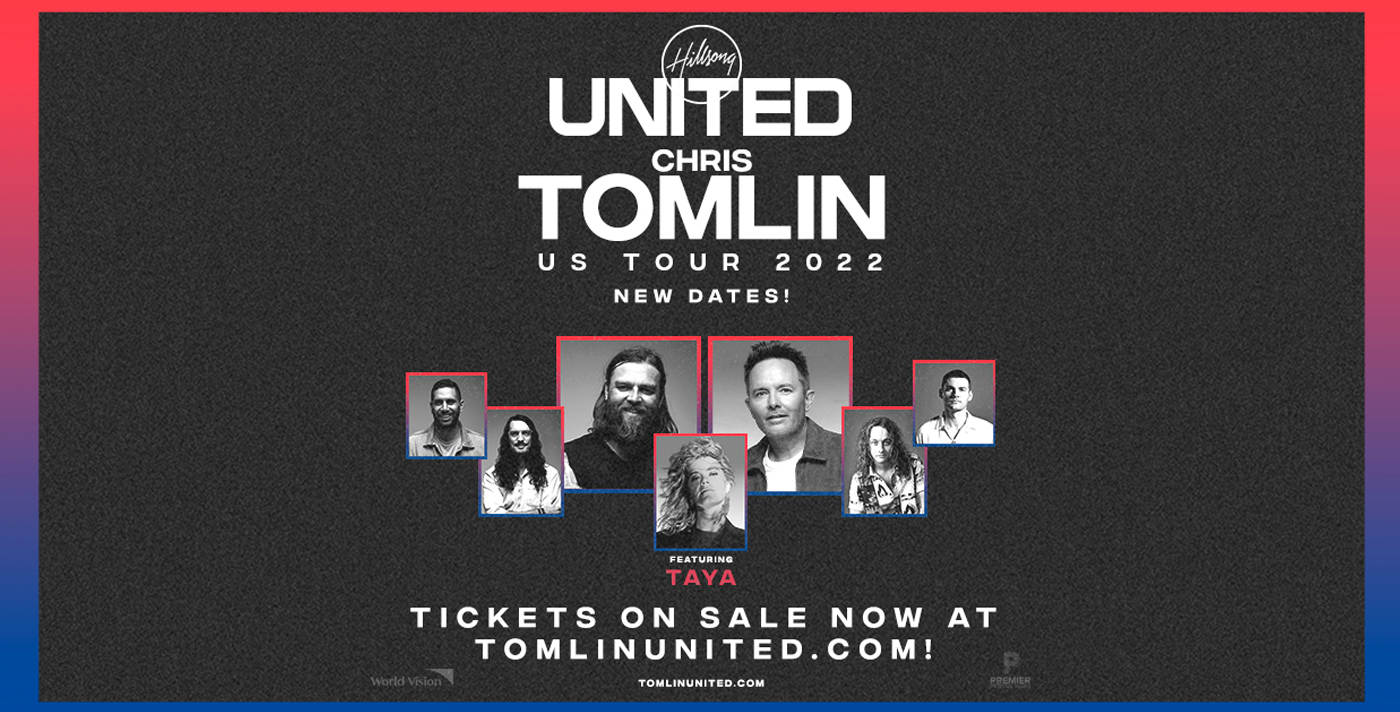 Tickets are on sale now for Hillsong UNITED + Chris Tomlin! Don’t miss them LIVE at Spectrum Center on November 20, 2022! Tickets at www.tomlinunited.com!

New Dates Begin November 3 for the

Watch highlights from the tour HERE

On the heels of their highly successful  22-city “Tomlin UNITED Tour” out earlier this year, the multi-platinum selling and multi-award-winning artists Chris Tomlin and UNITED are announcing the addition of a third leg coming this fall. The tour, named by Pollstar as a ‘Top 10 Worldwide Tour,’ will continue to welcome thousands of worshippers each night as one of the biggest Christian concert events continues with dates beginning November 3. Tickets for the “Tomlin UNITED Tour” will go on sale Thursday, September 1 at TomlinUNITED.com. Patrons can sign up now for the pre-sale at TomlinUNITED.com

“Something powerful happens when we come together, all the streams of the church, to worship in Unity and One voice… it’s more than a concert, it’s an opportunity for us to join in the eternal praise,” shared Chris. “My prayer and belief for these nights with United is that everyone in the building, myself, the attendees, the musicians, the crew, each person working at the venue - everyone - is met by God right where they are in life and has an encounter that reminds us of the hope we all have in Him.”

“In light of what our world has collectively been through in the last couple of years and the journey we have personally been through, being able to gather and worship together has been something that has brought much joy and encouragement,” shared Jonathon Douglass of UNITED. “That’s why we are so looking forward to continuing the journey of this tour to share and experience who God is and how he is present with each and every one of us right now! We look forward with great expectation to these nights with a great faith that God is going to move in our lives and bring joy and encouragement personally to everyone who joins with us!”

The fall leg will visit a dozen major cities across the U.S. including St. Louis, Seattle, Salt Lake City, Indianapolis, Charlotte and more. Music critics claimed the “Tomlin UNITED Tour” was ‘more than a concert- it was a worship experience for the performers and audience’ and ‘many were so overcome by the music they were brought to tears. The outpouring of emotion was awesome to witness.’

With a combined hope that this tour will help reunite the church, Tomlin and UNITED remained focused on launching the tour throughout an 18-month delay due to the COVID-19 pandemic. Premier Productions is the national tour promoter and World Vision will serve as the tour sponsor.

On September 9, Chris will release his next full-length project, Always. The title track was released to Christian radio this spring and made its live debut on the “Tomlin UNITED Tour” earlier this year. The official live video for “Always” was filmed live from Chris’ annual “Good Friday Nashville” concert event and premiered exclusively with Facebook.

UNITED released their new full-length studio album earlier this spring, Are We There Yet?

TIME magazine heralded Chris Tomlin as the “most often sung artist in the world” as his music has inspired and uplifted an entire generation of believers. Along the way, Chris has scored 17 #1 one singles at radio, placed 29 top ten hits (more than any other Christian artist), sold more than nine million albums with 5.6 Billion career global streams, earned a Grammy, three Billboard Music Awards, 27 Dove Awards, became a two-time BMI Songwriter of the Year honoree and an ASCAP Songwriter of the Year. In 2016, he was named one of only four artists ever to receive the Sound Exchange Digital Radio Award for over 1 Billion digital radio streams, alongside Justin Timberlake, Pitbull and Garth Brooks. Chris is also the first Christian artist to reach the Billion streams threshold on Pandora and was presented with their BILLIONAIRE award. As one of the most successful Christian touring artists today, Chris has sold-out venues everywhere including New York City’s Madison Square Garden, the Hollywood Bowl in Los Angeles, Nashville’s Bridgestone Arena, Red Rocks in Denver and more. Chris recently set a career attendance record with an unprecedented concert at LA’s Banc of California Stadium.  For more information:

UNITED is a multi-award-winning, platinum-selling artist whose chart successes (repeatedly no. 1 on Billboard’s Christian charts and up to #5 on Billboard 200) are only bested by the millions of lives they’ve impacted across the globe. Reporting over 50 million people singing from the Hillsong catalogue songs every Sunday, the modest band born from a youth ministry out of Hillsong Church in Australia, touts a reach of over 10 million across all major social network platforms to date, including 2.1 billion minutes garnered from YouTube viewers. Comprised of an evolving, eclectic mix of musicians and songwriters, the band is led by Joel Houston and Taya, names that have become synonymous with Christian radio, dominating airwaves with every new release. Their last four studio albums have each topped the USA Christian chart, with “Zion” and “Empires” charting no. 1 (“Zion” recently also went Gold in the US); “Oceans,” written by Houston and band member Matt Crocker recently went triple platinum in the States, counting 200+ million streams and reigning on top of the Christian songs chart for a record 54 weeks.

In studio, on tour or at home, UNITED is committed to writing songs that speak truth, create a unique sound and connect people everywhere with God, evident by the success they’ve seen globally. With over 50 countries and six continents visited, UNITED continues to sell out arenas and stadiums around the world, including sold-out nights at the Forum, STAPLES Center and The Hollywood Bowl in Los Angeles, The Toyota Center, Oracle Arena, Air Canada Arena, American Airlines Arena (Miami and Dallas), and Red Rocks to scratch the surface. UNITED functions from the deep understanding that everything they do is an expression of a really extraordinary God doing what only He can do, through really ordinary people.

World Vision is a Christian humanitarian organization conducting relief, development, and advocacy activities in its work with children, families, and their communities in nearly 100 countries to help them reach their full potential by tackling the causes of poverty and injustice. World Vision serves all people regardless of religion, race, ethnicity, or gender. For more information, please visit worldvision.org

Hornets Sports & Entertainment owns the Charlotte Hornets, Greensboro Swarm and Hornets Venom GT, and operates Charlotte’s Spectrum Center.  The Charlotte Hornets are a member of the NBA’s Southeast Division.  Owned by NBA Legend Michael Jordan, the Hornets organization strives to deliver a relentless attack on the court, an unmatched experience in the stands and a positive impact throughout the community.  The name of the city’s original NBA team from 1988-2002, the Hornets moniker returned to Charlotte in May 2014, uniting the rich history of NBA basketball in the Carolinas.  The Greensboro Swarm are the NBA G League affiliate of the Charlotte Hornets and play at the Fieldhouse at the Greensboro Coliseum Complex.  Hornets Venom GT is the organization’s esports team affiliate that joined the NBA 2K League in 2020.  Spectrum Center is the premier destination for sports and entertainment in the Carolinas, hosting over 150 sporting events, concerts and family shows annually.  For more information, please visit hornets.com, gsoswarm.com, HornetsVenomGT.com or spectrumcentercharlotte.com.