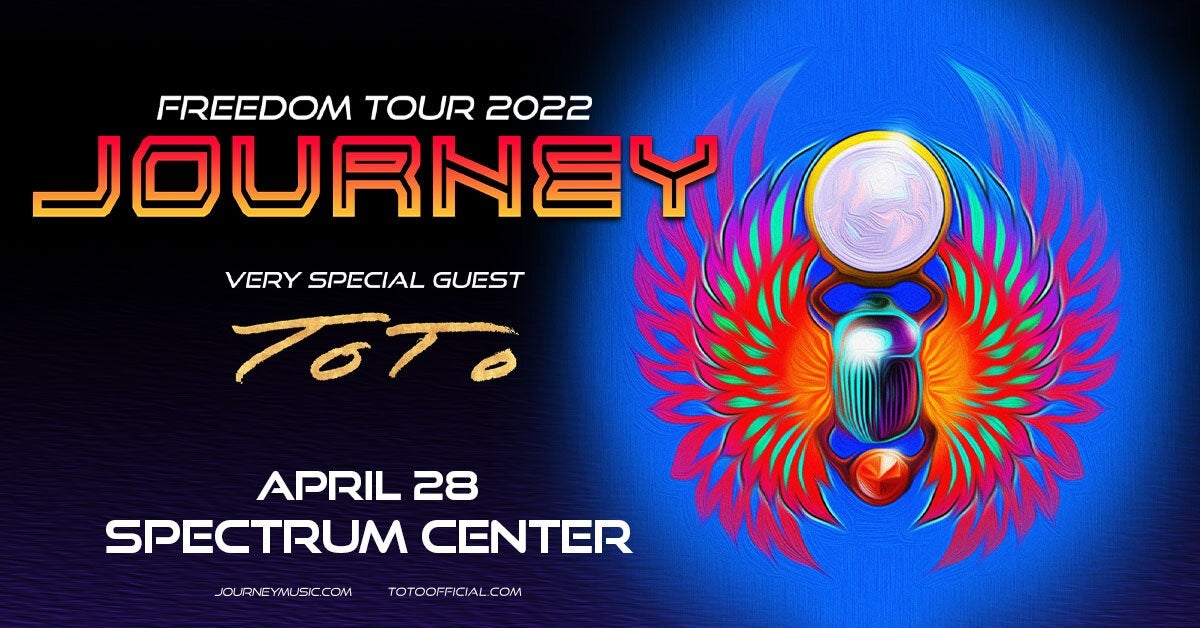 One of the most legendary rock bands of all time, JOURNEY, announces their Freedom Tour 2022, featuring very special guests BILLY IDOL and TOTO. The diamond-selling Rock & Roll Hall of Famers will take the stage in 40 cities across North America with their catalog of global chart-topping hits, including "Don't Stop Believin”, "Any Way You Want It", "Faithfully", "Lights" and more. The tour comes after the band previously announced a brand new six-show Las Vegas residency, running from December 1 to December 11 at the Theater at Virgin Hotels.

Presented by AEG Presents, the Freedom Tour 2022 begins February 22 in Pittsburgh, PA – making stops in Los Angeles, Dallas, Nashville and more – before wrapping May 11 in Hartford, CT.  Very special guest and Rock and Roll icon Billy Idol will join JOURNEY on all dates from February 22 through April 5. Very special guest TOTO, who have collectively streamed more than 3.3 billion plays on Spotify alone, will join JOURNEYon all remaining dates beginning in San Diego on April 7.

Citi is the official card of the JOURNEY Freedom Tour 2022.  Citi cardmembers will have access to presale tickets for US dates beginning Tuesday, November 16 at 10am local time until Thursday, November 18 at 10pm local time through Citi Entertainment. For complete presale details visit www.citientertainment.com.  A limited number of exclusive VIP Packages are also available. These exceptional offers can include an amazing selection of reserved seated tickets, custom merchandise and much more. Tickets go on sale to the public Friday, November 19 at 10am local time HERE unless otherwise noted.**

JOURNEY are one of rock music’s most influential icons, and they are set to deliver a brand-new album, FREEDOM, in 2022. This summer, the band headlined the Lollapalooza Festival in Chicago, uniting thousands of fans across generations with their decade-spanning setlist of beloved anthems. The group also rocked Central Park with “Anyway You Want It” and “Don’t Stop Believin’” at We Love NYC: The Homecoming Concert, in addition to honoring 9/11 first responders at the Tunnel to Towers concert in August. JOURNEY features founder Neal Schon (lead guitarist), Jonathan Cain (keyboards, backing vocals), Arnel Pineda (lead vocals) Jason Derlatka (keyboards, backing vocals), and Deen Castranovo(drums, backing vocals).

“It’s that time - time to get back to where we are used to being - on Stage!” says Neal Schon. “We are looking forward to shifting into high gear and bringing you the best show possible. The band is running on all 12 cylinders and very excited!  Please come and join us once again for an evening full of rocking stage connection fun. See you soon Friends.”

“Touring next year with JOURNEY is going to be great fun! An epic night you won’t want to miss,” Billy Idol says. “I’m excited to get back to so many wonderful cities and I’m bringing Steve Stevens and the rest of the Billy Idol band with me!”

TOTO’s Steve Lukather shares, “'On behalf of myself and the band, we are very honored and excited to do this tour with our old and dear friends JOURNEY. Gonna be a great night of music, and as all the guys are lifelong friends... a blast off stage as well.”

Since the group's formation in 1973, JOURNEY has earned 19 top 40 singles, 25 gold and platinum albums, and has sold nearly 100 million albums globally. Their "Greatest Hits" album is certified 15 times-platinum, making JOURNEY one of the few bands to ever have been diamond-certified, and their song "Don't Stop Believin'" has been streamed over one billion times alone.

JOURNEY was inducted into the Rock And Roll Hall Of Fame in 2017, and 2018's co-headlining tour with DEF LEPPARD was the band's most successful tour to date, landing them in the Top 10 year-end touring chart with more than 1 million tickets sold, and earning them the prestigious Billboard "Legends Of Live" touring award. March 2019 saw the release of "Escape & Frontiers Live In Japan", a live DVD/CD set from their concert at the Budokan in Tokyo featuring the band's first-ever performances of the albums "Escape" and "Frontiers" in their entirety. JOURNEY has also received a star on the Hollywood Walk Of Fame and were inducted into the Hollywood Bowl Hall Of Fame. Additionally, the band is the subject of the award-winning documentary "Don't Stop Believin': Everyman's Journey" about the band's resurgence upon adding Arnel Pineda as lead singer after founding member Neal Schon discovered the Philippines native on YouTube.

For forty-five years, Billy Idol has been one of the faces and voices of rock’n’roll, with an artistic resume to match the brilliant light of the image. First as the camera-ready front man for Generation X, between 1977 and 1981 Billy emerged with three albums that made positivity, emotional depth, and high pop synonymous with punk rock. In 1982, Billy embarked on a remarkable transatlantic/transgenre solo career that integrated clubland throb, wide-screen depth and drama, rockabilly desperation, the bold and simple lines of punk, and rock’n’roll decadence.

Decades after releasing his first 45, Billy Idol still makes gliding, thumping, cinematic songs about sin, redemption and the love of rock’n’roll…and that’s what you will find on The Roadside, Billy Idol’s first release of original material in seven years. Produced by Butch Walker (Green Day, Weezer, amongst many others), The Roadside takes Billy Idol into new but familiar waters full of color, power, atmosphere, attitude, and mystery.

On The Roadside Billy Idol is joined by his friend and collaborator since 1981, guitarist and co-songwriter Steve Stevens. For 40 years – 40 years! ­– Steve has been Billy Idol’s sonic assassin and master blender of tones and textures, the thinking man’s shredder and the shredding man’s Picasso.

Over the past several years, TOTO have had a major renaissance in popularity like few bands at this point in their career.  Their 40th anniversary in 2018 was marked by them releasing a brand new Greatest Hits album (40 Trips Around The Sun) and embarking on their most successful worldwide tour to date.   Few ensembles in the history of recorded music have individually or collectively had a larger imprint on pop culture than the members of TOTO.  As individuals, the band members can be heard on an astonishing 5000 albums that together amass a sales history of a half a billion albums.  Amongst these recordings, NARAS applauded the performances with more than 200 Grammy nominations.

Collectively TOTO has over two billion streams worldwide on all streaming services.  Just last year one of their biggest hits “Africa” went from being a Platinum single to being recently recertified 6X Platinum.  The band has found a new generation of fans.  With now 40+ years together and literally thousands of credits, including the biggest selling album of all time: Michael Jackson’s Thriller, and accolades to their names, TOTO remains one of the top selling touring and recording acts in the world. They are the benchmark by which many artists base their sound and production, and they continue to transcend the standards set by the entire music community, being simply synonymous with musical credibility.  They are pop culture, and are one of the few 70’s bands that have endured the changing trends and styles continuing to remain relevant while enjoying their multi-generational global fan base.

Combining the power of the live event with a focus on true artist development, AEG Presents is a world leader in the music and entertainment industries. Operating across four continents, the company has an unparalleled commitment to artistry, creativity, and community. Its tentpole festivals and multi-day music events — which include the iconic Coachella Valley Music & Arts Festival and the legendary New Orleans Jazz & Heritage Festival alongside British Summer Time at Hyde Park, Stagecoach, Hangout Festival, Electric Forest, and Firefly — continue to set the bar for the live music experience. AEG Presents promotes global tours for artists such as The Rolling Stones, Elton John, Taylor Swift, Celine Dion, Justin Bieber, Kenny Chesney, Paul McCartney, and Katy Perry, in addition to — through its network of clubs, theatres, arenas, stadiums and renowned partner brands such as Goldenvoice, Messina Touring Group, Concerts West, The Bowery Presents, PromoWest Productions, Marshall Arts, Madison House Presents, and Zero Mile Presents — creating and developing an unmatched infrastructure for artist development and audience reach. More information can be found at www.aegpresents.com.

Following recent guidance from the CDC and local health officials, and until further notice, MASKS ARE REQUIRED for individuals at least 5 years of age at all times while in Spectrum Center, except when ACTIVELY eating or drinking at the guestâ€™s designated seating location. All employees and visitors MUST wear a cloth face mask covering both the nose and mouth.