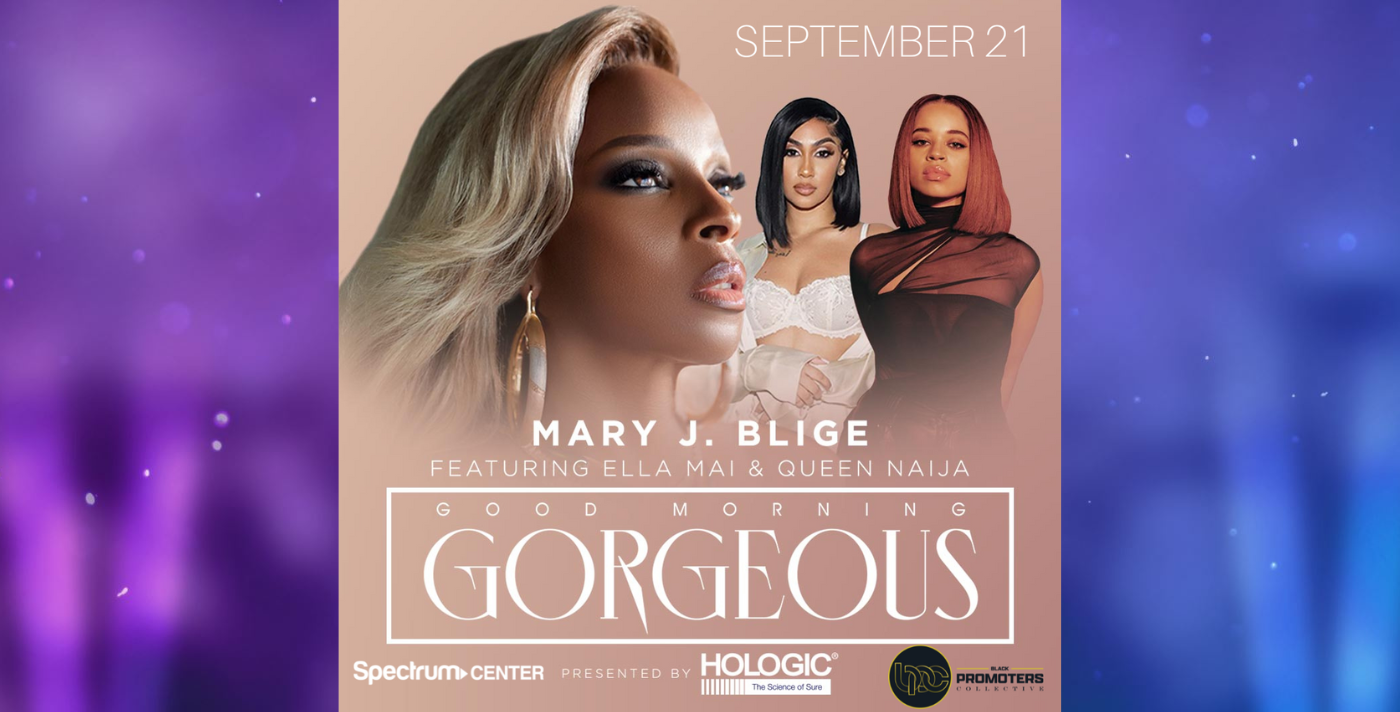 MARY J. BLIGE, ONE OF TIME MAGAZINE’S “MOST INFLUENTIAL PEOPLE OF 2022,” ANNOUNCES THE 23-CITY GOOD MORNING GORGEOUS TOUR PRESENTED BY HOLOGIC IN PARTNERSHIP WITH THE BLACK PROMOTERS COLLECTIVE

June 15, 2022 – One of Time magazine's icons listed in "The 100 Most Influential People of 2022" and the recipient of the 2022 "Billboard ICON Award," the undisputed Queen of Hip Hop Soul, Mary J. Blige, announces her Good Morning Gorgeous tour presented by Hologic in partnership with The Black Promoters Collective (BPC). GRAMMY Award-winning and Oscar-nominated Blige will perform in 23 cities with special guests, platinum-selling, GRAMMY Award-winning artist Ella Mai and platinum-selling rising star Queen Naija beginning on Saturday, September 17, in Greensboro, NC, and ending on Saturday, October 29, in Atlantic City, NJ. The tour also stops in Los Angeles, New York and Atlanta.

The Good Morning Gorgeous tour includes a visit to Charlotte’s Spectrum Center on Wednesday, September 21. Tickets will be available to the general public on Friday, June 17, at 10 a.m. and range from $69.50 to $189.50. Tickets can be purchased at blackpromoterscollective.com,  spectrumcentercharlotte.com or ticketmaster.com. Before offering to the general public, the Good Morning Gorgeous tour tickets go on presale today with The American Express® Card Members beginning June 15 at 10 a.m. through June 16 at 10 p.m.

“Mary J. Blige has been one of a select handful of artists at the top of our desired list to partner with since the initial construction of The BPC. Having her support in our mission so early in the process is a testament to the hard work we have put in to bring superior cultural experiences powered by black business to the masses. We firmly believe this is a match made in heaven and are honored to partner with the Queen,” states The BPC Co-Founder and President Shelby Joyner.

“We’re thrilled to continue our partnership with Mary J. Blige as the presenting sponsor for her Good Morning Gorgeous tour,” said Steve MacMillan, Hologic’s Chairman, President, and Chief Executive Officer. “As a global leader in women’s health, we’re committed to emphasizing the lifesaving importance of preventive screenings and the annual Well Woman exam, and Mary’s voice is a powerful way to reach millions of women.”

In addition to the previously stated accolades, the tour follows Blige's early 2022 album release of Good Morning Gorgeous. The album was released leading into her energetic Super Bowl Halftime performance. The title track rose to #1 at R&B radio for 9 weeks and the song became a viral backdrop for many expressing self-love, with over 40,000 users creating videos using the song on TikTok. A deluxe version was dropped just ahead of her wildly successful "Strength of a Woman" festival that took place last month in Atlanta.

Locations, venues & dates for the Good Morning Gorgeous tour presented by Hologic can be found below:

Iconic Grammy Award-winning singer, songwriter, Oscar-nominated actress, producer, and philanthropist Mary J. Blige is a figure of inspiration, transformation, and empowerment, making her one of the defining voices of the contemporary music era. With a track record of eight multi-platinum albums, nine Grammy Awards (plus a staggering 32 nominations), two Academy Award nominations, two Golden Globe nominations, and a SAG nomination, among many other accolades, Blige has cemented herself as a global superstar. Influenced at an early age by the music of Aretha Franklin, Chaka Khan, and Gladys Knight, Blige brought her own gritty, urban-rooted style—fusing hip-hop, soul, and honest, frank lyrics—to the forefront on her 1992 debut album What’s the 411? The multi-platinum set, executive produced by Sean “Diddy” Combs, quickly spun off several hits, including two No. R&B No. 1s: You Remind Me and Real Love. Blige helped redefine R&B and began forging a unique niche for herself on the more personal second album, 1994’s My Life. She is loved for her passionate, chart-topping hits like “Be Without You,” “No More Drama,” and “Family Affair,” all of which have made her a force in music. Over her career, Blige has released 15 studio albums (most recently Good Morning Gorgeous) and has starred in films and television programs such as Mudbound, The Umbrella Academy, Power Book II: Ghost, Respect, and has recently released her own documentary, Mary J. Blige's My Life. This past February, she performed at the Pepsi Super Bowl LVI Halftime Show at SoFi Stadium in Inglewood, CA, alongside Dr. Dre, Eminem, Snoop Dogg, and Kendrick Lamar. Blige has her own production company, Blue Butterfly, and recently launched her own festival, “Strength of a Woman Festival and Summit,” with Pepsi and in partnership with Live Nation Urban.

In 2018, Ella Mai’s first single, “Boo’d Up,” broke the record for the most weeks at No. 1 of any song by a woman on the “R&B/Hip Hop Billboard Airplay” chart. Her follow-up single “Trip” peaked at No. 11 on the Billboard “Hot 100,” and her album, Ella Mai, has almost 6 billion streams and is RIAA Certified Platinum. In addition to her chart-topping domination and success, Ella Mai has won a number of awards, including her first GRAMMY for Best R&B Song, 3 Billboard Music Awards, including the coveted Top R&B Artist, 3 iHeartRadio awards including R&B Artist of the Year, 3 Soul Train Awards, and a BET Viewers Choice Award. After two years of touring the world, Ella released her new single, “Not Another Love Song,” off her forthcoming album. In her own words, the new single “is about falling in love but not wanting to admit it, so it's quite vulnerable but still has an edge to it.” If the adage is true and history always repeats itself, get ready for Ella Mai to dominate the music and cultural zeitgeist once again.

Singer/Songwriter Queen Naija has cemented her status as one of R&B’s most compelling young stars. Hailed as “the first soul star of the social media generation” by The New York Times, the 25-year-old Detroit native has amassed over three billion combined global streams to date. Queen struck out on her own with her breakthrough single “Medicine,” which debuted at No. 45 on the Billboard Hot 100 (a nearly-unheard-of achievement for an unsigned artist) and quickly landed her a deal with Capitol Records. Her 2018 critically acclaimed self-titled EP debuted at No. 1 on Billboard’s Emerging Artists chart and earned major recognition in the 2019 awards season, including nominations for Top R&B Artist at the Billboard Music Awards and Best New Artist at the BET Awards, in addition to three nods at the iHeartRadio Music Awards. In October 2020, she released missunderstood, a five-song project featuring three platinum-certified singles: “Butterflies,” “Karma,” and “Medicine.” This project proved to be another smash success for Queen, debuting at No. 1 on Billboard’s Top R&B Albums chart and cracking the top 10 on the Billboard 200.

About The Black Promoters Collective

The Black Promoters Collective (BPC) is a coalition of six of the nation's top independent concert promotion and event production companies. As a 100% Black-owned business, its mission is to be the world's leading producer and provider of culturally relevant live entertainment experiences. To learn more, visit http://www.blackpromoterscollective.com.

Hornets Sports & Entertainment owns the Charlotte Hornets, Greensboro Swarm and Hornets Venom GT, and operates Charlotte’s Spectrum Center.  The Charlotte Hornets are a member of the NBA’s Southeast Division.  Owned by NBA Legend Michael Jordan, the Hornets organization strives to deliver a relentless attack on the court, an unmatched experience in the stands and a positive impact throughout the community.  The name of the city’s original NBA team from 1988-2002, the Hornets moniker returned to Charlotte in May 2014, uniting the rich history of NBA basketball in the Carolinas.  The Greensboro Swarm are the NBA G League affiliate of the Charlotte Hornets and play at the Fieldhouse at the Greensboro Coliseum Complex.  Hornets Venom GT is the organization’s esports team affiliate that joined the NBA 2K League in 2020.  Spectrum Center is the premier destination for sports and entertainment in the Carolinas, hosting over 150 sporting events, concerts and family shows annually.  For more information, please visit hornets.com, gsoswarm.com, HornetsVenomGT.com or spectrumcentercharlotte.com.