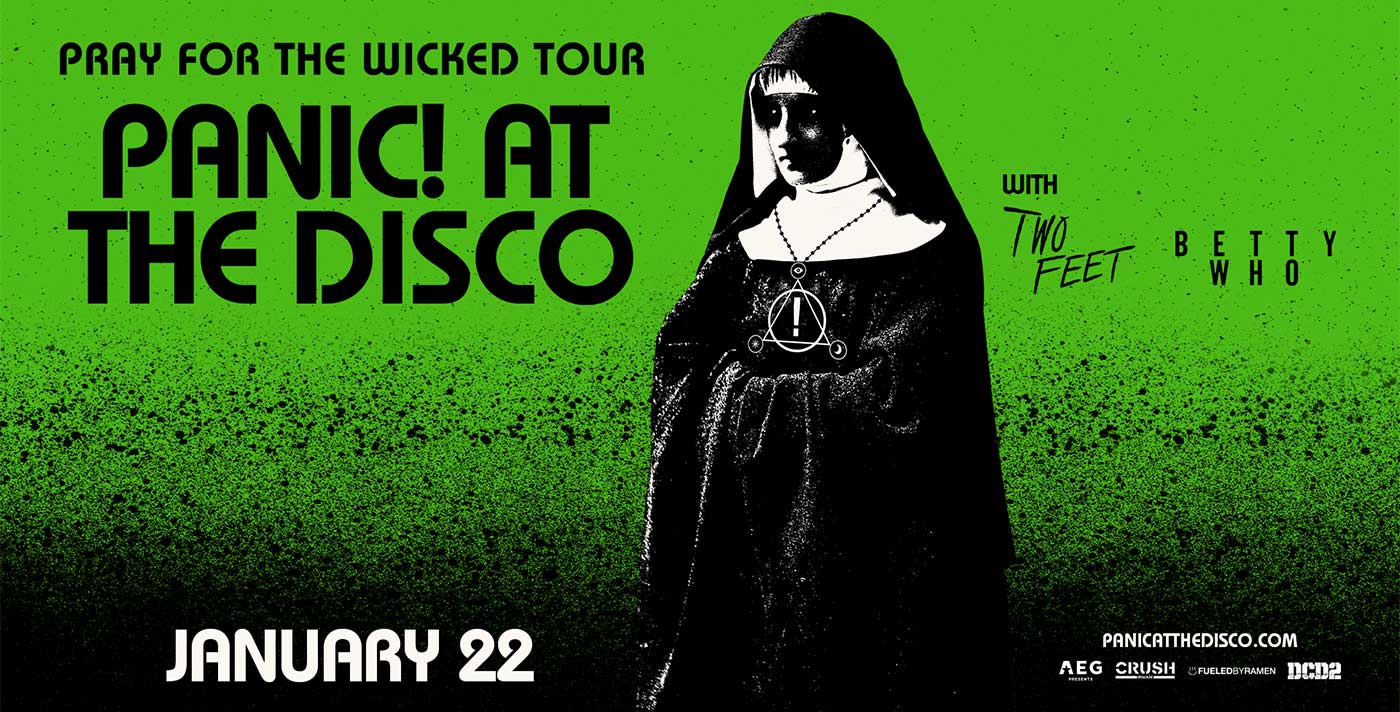 June 13, 2018 – Grammy-nominated band Panic! At The Disco today announced a second leg of their upcoming Pray For The Wicked North American arena tour that will kick off on January 10, 2019 in Buffalo, NY, and wrap on February 20, 2019 in Sacramento, CA. Produced by AEG Presents, the 28-city leg will feature support from Two Feet and an opener is to be announced.

Panic! At The Disco will play Charlotte’s Spectrum Center on Tuesday January 22, 2019.  Pre-sale tickets will be available beginning Friday, June 22 at 9am local time and general tickets will go on-sale to the public on Friday, June 22, at 12 noon atspectrumcentercharlotte.com and PanicAtTheDisco.com, the Spectrum Center Box Office, all Ticketmaster outlets or by phone at 800-745-3000.

Fans who pre-order Pray for the Wicked via Panic’s webstore before June 21 at 7pm ET will receive a unique presale code for first access to tickets.

Panic! At The Disco will also do an international run of dates visiting Australia, Japan, New Zealand, The Philippines, and Mexico in October. See below for specific on sale dates for these international shows and head to PanicAtTheDisco.com for more info.

The first leg of the Pray For The Wicked Tour, which has sold out multiple venues including NYC’s Madison Square Garden, will kick off on July 11, 2018 in Minneapolis, MN, and will visit major markets throughout the summer before concluding in the band’s hometown of Las Vegas on August 18th.

A R I Z O N A and Hayley Kiyoko provide support. Tickets for the leg one are on sale now. A complete list of upcoming live dates and ticket information can be found HERE.

Panic! At The Disco will release their highly anticipated new album Pray For The Wicked on June 22 via Fueled By Ramen/DCD2 Records. Announced in March after a week of cryptic clues that set the internet a buzz, the album is available for pre-order now HERE. Fans who pre-order the album will receive immediate downloads of the album’s lead single “Say Amen (Saturday Night)” and tracks “(F* A) Silver Lining” and “High Hopes”.

On June 29, Panic! At The Disco will perform live on the Plaza as part of the 2018 Citi Concert Series on TODAY on NBC. Watch the band’s thrilling performances of “Say Amen (Saturday Night)” on The Tonight Show Starring Jimmy Fallon HERE, The Ellen DeGeneres Show HERE, and The Voice HERE.

Pray For The Wicked follows Panic! At The Disco’s critically acclaimed fifth album, Death Of A Bachelor, which was released on January 15, 2016 via Fueled By Ramen/DCD2 Records. The album debuted at No. 1 on the Billboard 200 Chart and was nominated for Best Rock Album at the 2017 GRAMMY® Awards. The RIAA platinum selling release was the highest selling rock album and fourth-highest selling album released in 2016, according to Nielsen Soundscan. The album has also spawned RIAA certified gold tracks “Hallelujah," “LA Devotee,” “Don’t Threaten Me With A Good Time” and platinum “Victorious,” "Death Of A Bachelor,” and "Emperor's New Clothes."  Most recently, frontman Brendon Urie starred as Charlie Price in the critically acclaimed, TONY Award winning Broadway hit Kinky Boots.