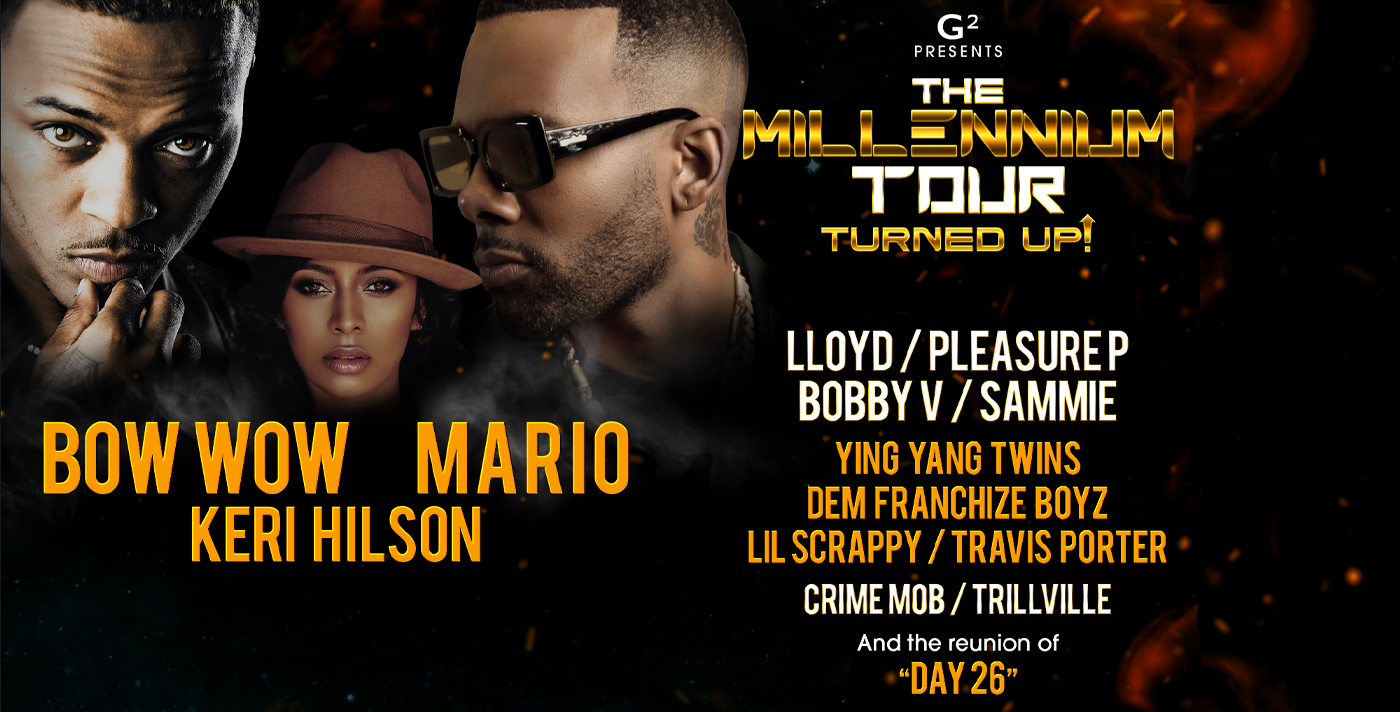 HOUSTON (August 12, 2022) – Said to be "a revue-style, all-killer-no-filler procession of R&B and hip-hop acts that came to prominence around the turn of the millennium," by Keith Spera of the New Orleans Times-Picayune, G2 Presents The Millennium Tour:  Turned Up!, presented by G-Squared Events and The Black Promoters Collective (BPC)  is back with headliners Mario, who proved he is still one to watch with this year's Verzuz, Bow Wow, a mainstay and crowd favorite, and R&B starlet Kerri Hilson performing in 24 cities, starting on Friday, October 7, 2022, in Hampton, VA, and ending on Sunday, November 27 in Oakland, CA.

"It is a pleasure to continue the legacy of The Millennium Tour with superstars Bow Wow and Mario.  Both artists exemplify the greatness of music coming out of that era and will put on a show that excites as they have proven to deliver every single time," states G2 Founder and The BPC Co-Founder and CEO Gary Guidry.

Locations, venues & dates for the Millennium Tour can be found below:

Multi-platinum and award-winning recording artist Bow Wow started his career at 13-years of age and instantly became a heartthrob and super star.  His debut single, “Bounce With Me” was released in the summer of 2000 and appeared on the soundtrack to the Martin Lawrence film Big Momma’s House.  He went on to become a huge star in Hollywood with appearances that include Johnson Family Vacation, Roll Bounce, the highly successful The Fast and The Furious franchise and more.

Multi-platinum recording R&B star Mario first gained national attention as the teen singing sensation behind hits such as “Just A Friend 2002” and “Let Me Love You.”  Signing to music legend Clive Davis’ J Records, his eponymous debut studio album rolled out with “Just A Friend 2002,” a take on Biz Markie’s 1989 Top 10 Pop single which was a Top 5 R&B/Pop Hit and took his debut to the top of the charts.  He went on to release back-to-back gold and platinum projects rounding out his career.

Singer, songwriter, and actress Keri Hilson is a platinum-selling recording artist whose debut debut studio album, In a Perfect World..., debuted at number four on the US Billboard 200 chart. The album spawned the hit singles "Knock You Down" (featuring Kanye West and Ne-Yo), "Turnin Me On" (featuring Lil Wayne), and "I Like". It also earned Hilson two Grammy Award nominations for Best New Artist and Best Rap/Sung Collaboration for "Knock You Down". Hilson has also contributed to various charities and pursued a career in acting, and she continues to record and perform music. She has contributed in the fight against HIV and AIDS, helped various relief efforts for natural disasters, and become involved with several educational organizations. In 2012, Hilson made her acting debut in the romantic comedy film Think Like a Man. Her achievements include a BET Award, MOBO Award, NAACP Image Award and two Soul Train Music Awards.

About The Black Promoters Collective

The Black Promoters Collective (BPC) is a coalition of six of the nation's top independent concert promotion and event production companies. Officially launching in 2022 with their first two live entertainment offerings, the headlining tours for R&B legends New Edition and Maxwell, both landed in the Top 10 of the Pollstar "Live 75" chart. As a 100% Black-owned business, its mission is to be the world's leading producer and provider of culturally relevant live entertainment experiences. To learn more, visit http://www.blackpromoterscollective.com.