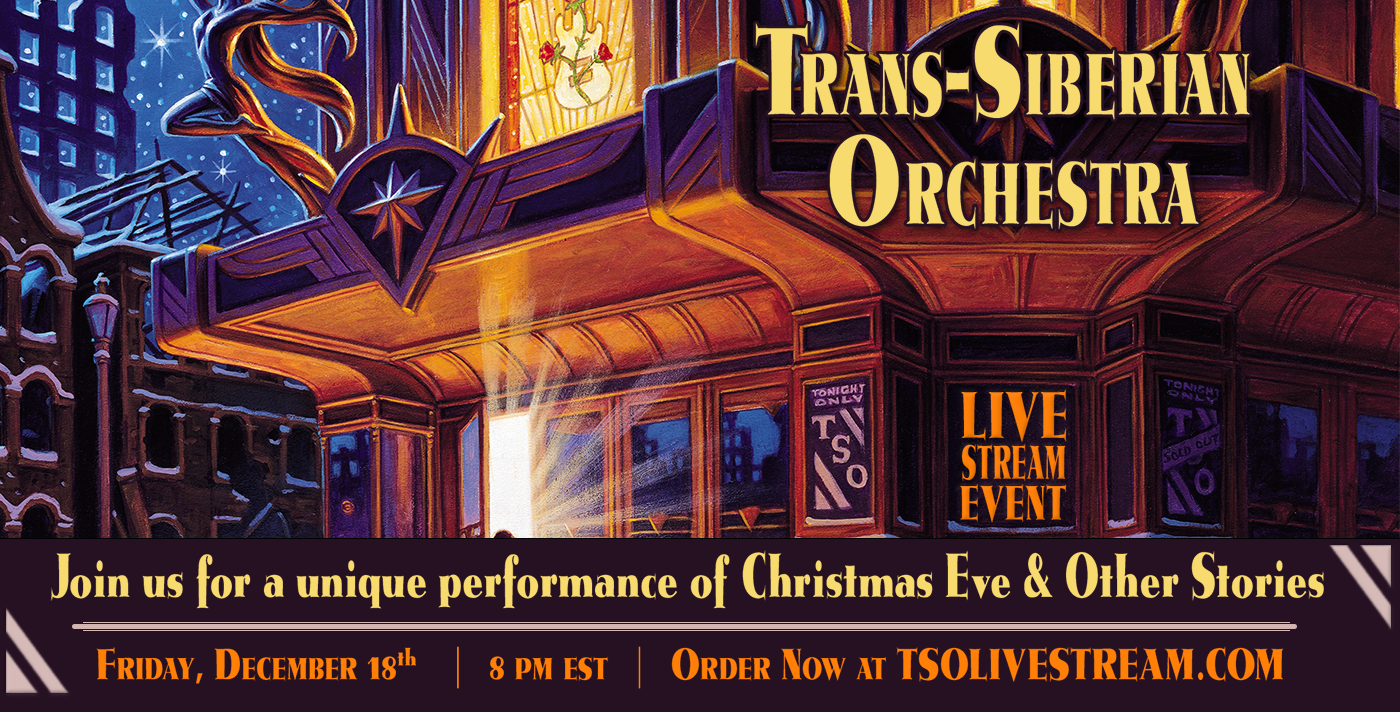 Los Angeles, CA (Oct. 22, 2020) – In August, Trans-Siberian Orchestra (TSO) was forced to make the heartbreaking announcement that, for the first time in more than 20 years, the group will not be able to tour during the holiday season. T he multi-platinum, critically acclaimed, progressive rock group, is proud to make an exciting announcement today – to keep its rock holiday tradition alive, TSO will bring a performance right into fans' homes with the world premiere of its first-ever livestream event, “Christmas Eve and Other Stories Live In Concert,” on Fri., Dec. 18.

TSO performing an all-new staging of its beloved album “Christmas Eve and Other Stories,” means that fans, despite missing so much in 2020, won't have to miss their favorite holiday tradition. This electrifying livestream will bring some much-needed rockin’ Christmas spirit to fans everywhere. In addition to the full album concert, fans will view special pre-show content including behind-the-scenes footage and classic interview segments.

General public on sale begins today. Keeping the TSO tradition of offering huge entertainment value for a low ticket price, advance tickets for TSO’s “Christmas Eve and Other Stories Live In Concert'' will be offered as a family-friendly $30 all-in ticket. For fans unable to view the livestream’s debut on Fri., Dec. 18, TSO will make the performance available for streaming on demand through midnight on Sun., Dec. 20. In addition to purchasing the stream, fans will have the option to purchase gift packages, including T-shirts, ornaments, and masks, plus livestream tickets can be sent digitally to friends and family as presents. For more details and to purchase tickets and packages, visit www.trans-siberian.com.

TSO’s Music Director & lead guitarist Al Pitrelli said, “So many things have changed in 2020. Masks, social distancing, home schooling, and of course live entertainment. What will not change is all of us being able to celebrate the holidays together. It will just be in a different way. For 21 years we’ve had the privilege of bringing our tours, including ‘Christmas Eve and Other Stories,’ to hundreds of cities and millions of people. This year we will bring this timeless story to your living rooms. We will miss seeing all of you in person, but like Paul O’Neill always said, ‘adapt, overcome, and improvise.’ That’s exactly what we are going to do. This will be an opportunity to see your favorite holiday story up close and personal. We can’t wait to share this with all of you. In the meantime... Stay safe. Stay healthy. We’re on our way!”

A product of the vision and imagination of TSO’s late founder, composer, and lyricist Paul O’Neill , “Christmas Eve and Other Stories” gave birth to the unique format O’Neill called “Rock Theater.” The story is set on Christmas Eve when a young angel is sent to Earth to bring back what is best representative of humanity. Following favorite TSO themes of “strangers helping strangers” and “the kindness of others,” “Christmas Eve and Other Stories” takes listeners all over the world to help reunite a young girl with her distraught father. The album features such fan-favorites as both of which have not been performed live in recent years. The rock opera also features such TSO classics as "Christmas Eve/Sarajevo 12/24," "O’ Come All Ye Faithful," "Good King Joy," "Promises To Keep," "This Christmas Day," “Ornament,” and the epic “Old City Bar.”

Since its historic touring debut, TSO has played approximately 2,100 concert dates for more than 17 million fans and has sold in excess of 12 million albums and DVDs.