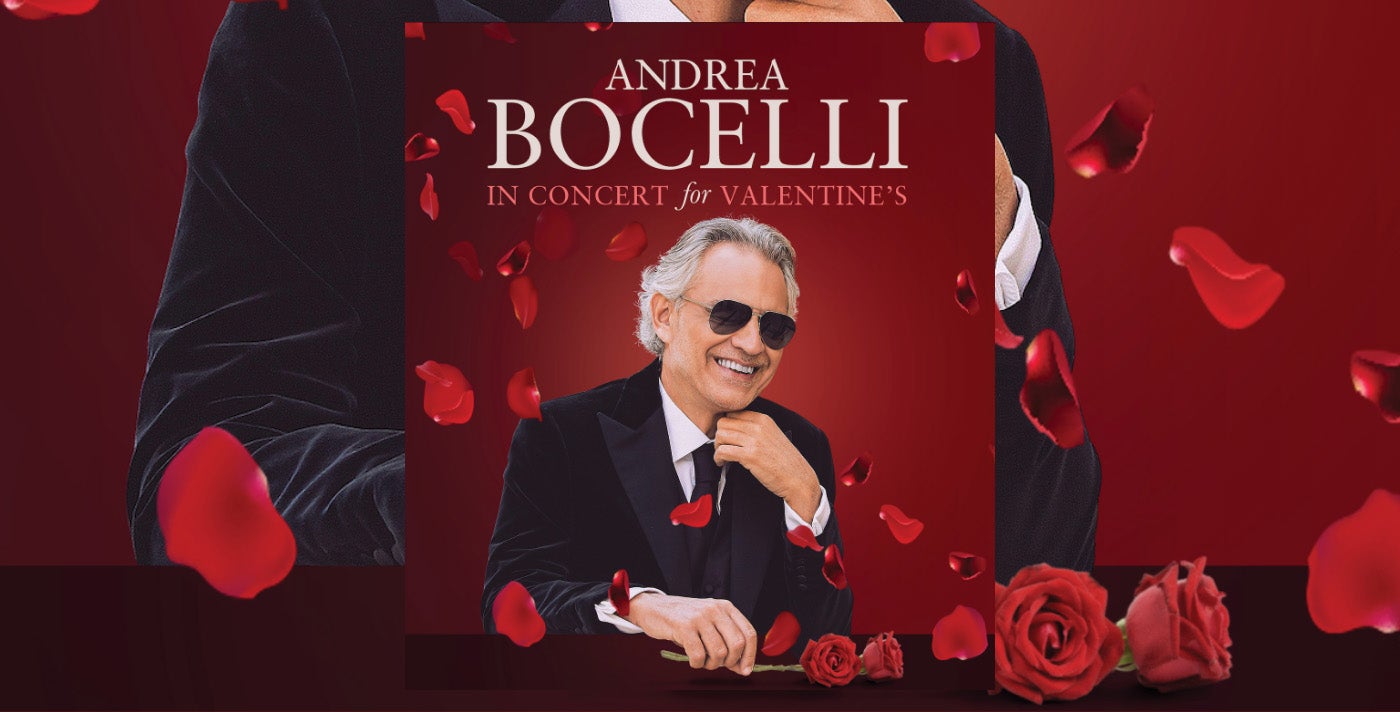 September 29, 2021 – Today, world-renowned Italian tenor Andrea Bocelli announced the 2022 In Concert For Valentine’s tour to celebrate the forthcoming February holiday. The annual tour dates include five shows scheduled for Atlanta, Charlotte, Las Vegas, Phoenix and Sunrise, FL. In Concert For Valentine’s will have Bocelli returning to the U.S. following his extensive upcoming 21-city Believe North American Tour, which begins in October and features performances at the legendary venues Hollywood Bowl in Los Angeles and Madison Square Garden in New York City. For the entire routing, please see dates listed below.

Bocelli’s In Concert For Valentine’s tour includes a performance at Charlotte’s Spectrum Center on Friday, February 11, 2022, marking Bocelli’s third Valentine’s visit to the venue in five years. Tickets will go on sale the general public beginning on Monday, October 11, at 10 a.m. at spectrumcentercharlotte.com, ticketmaster.com, andreabocelli.com and gelbpro.com/tour.  In Concert For Valentine’s will showcase some of Bocelli's most romantic music including songs from his inspiring new album Believe as well as a selection of arias, his beloved cross-over hits and famed love songs.

“I’ve eagerly waited for many long months to be able to say to you: where did we leave off?” said Bocelli. “Today I am pleased to give each of you, my dear friends from my second beloved homeland, a date to put in your diaries. Returning to the stage means much more than just a concert. For me, it means meeting the people and things I love again and to share a common drive that aims to celebrate love and life and the One who gave it to us. In my heart, I am already in the United States, to embrace the many people in the many cities of my fall tour. And to those who will choose to celebrate Valentine’s Day with me, I say: ‘Have a little patience, and while you wait to experience it together, please allow me to give you a piece of advice - make every day Valentine’s Day for you!’”

Andrea’s U.S. tours are sponsored by global investment firm Stifel. “We’re thrilled to serve as presenting sponsor of Andrea Bocelli’s U.S. tours,” said Ron Kruszewski, Chairman and CEO of Stifel. “Andrea's live performances are so poignant, and his connection with the audience is so genuine, that he epitomizes the kind of shared experience we have been missing during a year of lockdown. We’re particularly excited to share it with our valued Stifel clients by inviting them to purchase tickets before they go on sale to the general public through a special presale.”

As one of the most recognizable voices in the industry, and revered by fans internationally, Andrea Bocelli has been entertaining audiences for over 20 years, counting nearly 90 million records sold worldwide. In addition to his sold-out arena-sized concert events and record-breaking live-streams, Bocelli has shared his talents at many major events including the Olympic Games, the World Cup, and his performance with

Global Citizen last weekend. He has earned a Golden Globe, seven Classical BRITs and seven World Music Awards, plus a star on the Hollywood Walk of Fame. His previous album, Si, reached No.1 on both the U.S. and U.K. charts.