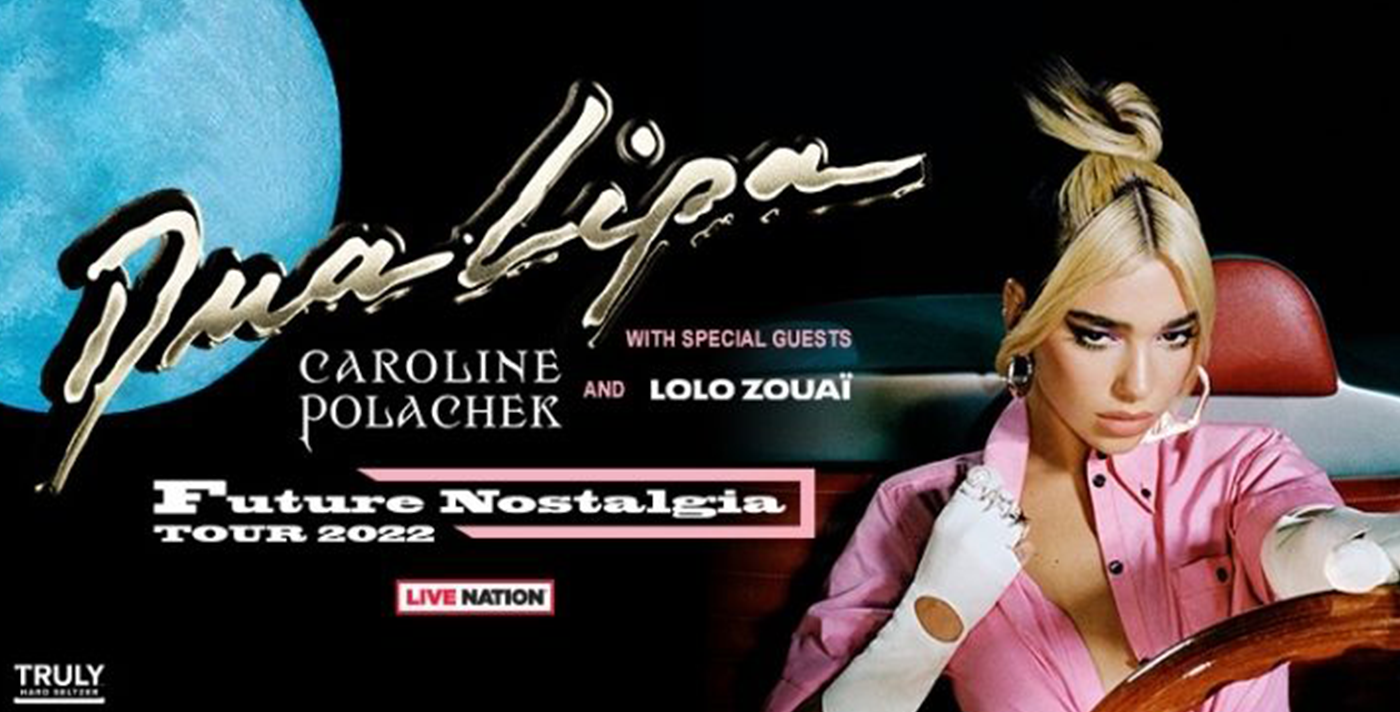 September 13, 2021 – Today, global pop superstar Dua Lipa announced the North American leg of her highly anticipated Future Nostalgia Tour for 2022, in support of the Grammy-winning album of the same name. The arena tour makes 28 stops across the United States, including Dua’s first ever headline show at Madison Square Garden in New York City and the iconic Forum in Los Angeles. The Future Nostalgia Tour will also feature support from Caroline Polachek and Lolo Zouaï, with Megan Thee Stallion joining on select dates.

“I’m so thrilled to tour again and see my angels in person! How amazing that we all get to dance and celebrate together once again,” says Dua. “When I was writing Future Nostalgia, I imagined the songs being played in clubs on nights out with your mates. I’m so excited that this fantasy is finally coming true. I can’t wait to experience these songs with you together live!”

The long-awaited Future Nostalgia Tour, produced by Ceremony London, promoted by Live Nation and sponsored by Truly Hard Seltzer, will be the first time Dua connects her live vision for this album in-person with fans. Previously, the superstar was able to connect with fans during her record smashing live stream extravaganza Studio 2054, which had over 5 million viewers during its initial airing and featured special guests Angele, Bad Bunny, Elton John, FKA Twigs, J Balvin, Kylie Minogue, Miley Cyrus and Tainy. Dua is already slated to tour the EU in 2022, making this her first world tour run since breaking records during quarantine with her platinum-certified sophomore album Future Nostalgia.

Future Nostalgia is the longest running top 10 album by a female artist on the Billboard 200 this year and was the #1 most streamed album of 2020 on Spotify. It landed on the year-end “Best Of” lists of everyone from Rolling Stone to Billboard and Pitchfork, and spawned multiple worldwide hit singles including the #1 tracks “Break My Heart,” “Levitating,” which is still topping the charts and is the longest running song ever on Spotify’s Today’s Top Hits playlist, and US 4x platinum lead single “Don’t Start Now,” which broke her personal best record of weeks at #1 at US Top 40 radio and is the most streamed track on Spotify’s Today’s Top Hits playlist in history.

In addition to breaking radio records, Dua is also a dominate force on streaming platforms, topping Spotify’s artist chart as the most streamed female artist on the platform and is currently the fourth biggest artist overall with over 65 million monthly listeners. Future Nostalgia now has over 7 billion streams across all platforms worldwide. After receiving six nominations at the 2021 Grammys, including Record, Song and Album of the Year, she is now a three-time Grammy winner, having received awards for Best Pop Vocal Album this year and for Best New Artist and Best Dance Recording in 2019. Future Nostalgia was the follow up to her eponymous 2017 debut, which is certified platinum, spawned six platinum tracks, and made Dua the first female artist in Brit Awards history to pick up five nominations, with two wins for British Breakthrough Act and British Female Solo Artist.